Farewell, my lovely Nancy, for it’s now I must leave you,
All on the salt seas I am bound for to go;
But let my long absence be no trouble to you,
For I shall return in the spring, as you know…

This week we’re serving up some serious maritime realness!

Standard skull with crossed sword and bone, the desert island and sunset (a classic 90s nail motif) a ship, circled in rope over a parchmenty effect (white dappled with yellow powder) an anchor, and some merpeople!

So far the sunset proving by far the most popular (when fingers placed together it forms a whole island, like two pieces of a jigsaw – the merpeople compliment each other in a similar way). 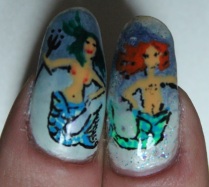 I am proudest of the ship, though, as I thought that one could go very badly.

Skull and crossbones is black painted over a white background, oddly, just because I thought this would be easier.

You love it, we love it.

Goin this way, that way, forward and backwards, over the deep blue sea,

A bottle of rum to fill my tum and THAT’S THE LIFE FOR ME!

The Contrast Nail here has ended up looking like a print for the harem trouser fabric of some sort of yogurt-plaiting, yoga Mum but in a way this works because the rest of the nails are kind of psychedelic, so they represent her acid-dropping, trip-hopping, mind-bending, festival-attending youth, and the contrast is her mellowed-out maturity.

She lives in Totness, Devon.

This set, then, represents age and the sands of time, and the processes we all go through on our winding way to the boneyard.

HERE’S HOW WE ACHIEVED THE LOOK…

Begin with the Powder Gradient – this is gold with a bright pink Barry M powder. The powder this time is at the nail tip rather than the bottom, which calls for a slightly different technique and is a bit messier (don’t do this in bed). DON’T FORGET TO LEAVE OUT YOUR CONTRAST NAIL if you want to do one. 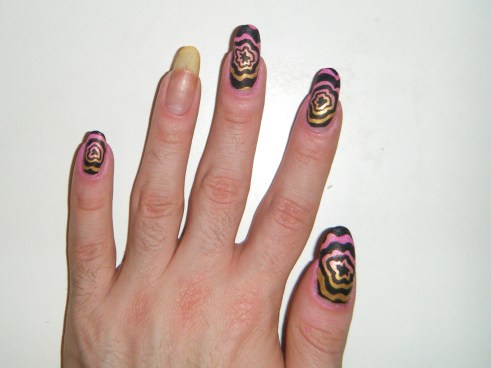 Using a nail art pen, a striping brush or a liquid eyeliner, draw a ‘splat’ shape in the centre of the nail, then draw a thin stripe around the shape paying attention to emphasise the bumps and curves. Simply repeat outwards with increasingly thick stripes.

Apply a thick top coat (if you have used eyeliner, you may have to do this a bit softly to avoid flaking)

Losing marks for it’s slightly awkward hippy-dippyness, but overall a lot of fun and have proven popular over the week. Peace and Love, as always.

We ran into Victoria, who is a hiphop’n’happening young stylist from Sideview magazine.

She was in the audience of Ziad Ghanem’s London Fashion Week show.

She wowed us with her square acrylics; clear/natural base with black tiger stripes, and gold glitter details.

Importantly, she also accessorised with some amazing gold finger-candy. Glitter, wings, studs, a leopard. All just what’s needed to set off those pro nails!

She said she didn’t have much loyalty when it came to getting her nails done, and has manicures in lots of places.