This is Chan. She is a hip young thing who we met in Topshop.

We had to get a picture of these dream talons, which a friend did for her. 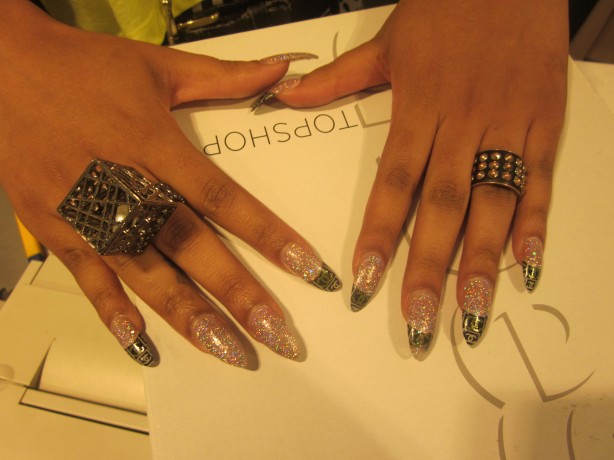 Chan always has nails done so I asked her about phones and she said:

“I used to have a Blackberry but my nails were actually completely ruining the keys, so I have just changed to an iPhone and I hate it. I absolutely hate it! I’m like [mimes trying to use a touch screen with a really flat finger.]”

Well we all know about that, but who needs to be able to use a phone when your glittery, Chanel nails looks so sickening?!

So it isn’t street style in the strictest sense, but we thought we had to put up our dear friend, artist Liv Fontaine‘s first foray into the world of pro nails.

Liv, who is 22 and from Southhampton, sent this picture in all the way from San Francisco, and we can see why.- these nails are glorious, like fireworks across a pink sky, and certainly fit for a scandalous gutterslut Queen! YOU GOT SOME MONEY FO ME?!

Even though we’re trying to steer clear of the acrylics slippery slope, we’re pretty jealous of these.

Stay tuned for further thoughts on the very current – and I might add pretty controversial – topic of square tips.

We met our new fashion-foward friend Jasmine on the Ferry from England to Dublin and instantly fell for her look that expertly treads the line between cute and badass.

You won’t be completely Christmas gobsmacked to find that Jasmine – 18, from London – is a fashion student. 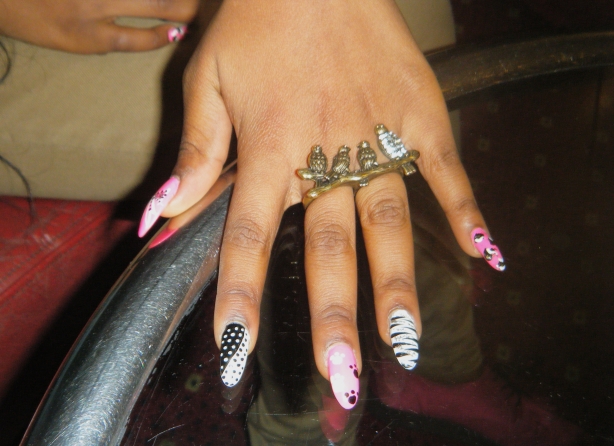 Jasmine’s paw-print nails in classic RuPaul Drag Race colours were clock-able from across the boat! As you can see, they complimented her creature hat, and there’s even some creatures on her ring. We’re particularly keen on the index finger nail.

My friends at a Christmas party last night described Jasmine as a ‘cool lady’. I feel this probably is what has enabled her to carry off Dr Dre headphones without looking like a massive poser.

I don’t think they realise that street style is meant to be on the STREET, dig? These are some pictures their readers just sent them along.

Still, nice to see everyone getting involved.

Our fave is the Adidas/Run D.M.C. manicure with the mean original colours. Amazing use of matte black here – shiny would have compromised the clarity of the letters and logo.

Some girl has the blue/gold half-moon manicure our friend Frances did like a YEAR ago. Heh heh.

OK, different shades/shapes, but this is intellectual property, not forensics.

Anyway their yield is worth a look, but not if you get cuticle-cringe…some of these bitches; RAGGEDY AS HELL! 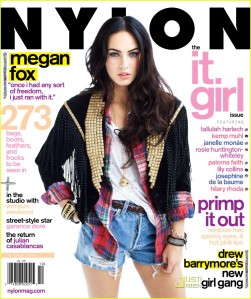 We met Rachael at Waterloo station a few weeks back.

She sports a new trend we’re noticing more and more in nail art – the ‘contrast finger’.

At first we thought it might just be a coincidence, but we saw it about 3 more times and realised it is for sure a trend.

Stay tuned for our own interpretation of the ‘contrast finger’ (nearly always the ring finger, it seems)

Rachael is 16 and a college student. She told us she gets her nails done in Peckham, because it’s cheap and ‘that’s what everyone does.’

Rachael’s ‘contrast finger’ has stirred some controversy amongst the people she asked, many remarking that it ‘looks like a mistake,’ and even exclaiming ‘what is she doing?!’

But we love it; it makes you look twice, and we feel as long as both hands match, it looks quite deliberate.

We ran into Victoria, who is a hiphop’n’happening young stylist from Sideview magazine.

She was in the audience of Ziad Ghanem’s London Fashion Week show.

She wowed us with her square acrylics; clear/natural base with black tiger stripes, and gold glitter details.

Importantly, she also accessorised with some amazing gold finger-candy. Glitter, wings, studs, a leopard. All just what’s needed to set off those pro nails!

She said she didn’t have much loyalty when it came to getting her nails done, and has manicures in lots of places.