Oh hi there, welcome to Best City Nails, your one-stop shop for making the best of your bargain basement nail art products.

…the main things I have learnt from these nails is the powder gradient WITHIN a masking tape stripe, executed poorly on the right thumb (my actual right hand, but to the left of your vision) but really quite ok on the left contrast nail.

The glitter is not done justice in this well-lit close-up, but in normal life and particularly in the evening these clumps of glitter are a bit more dazzling, which accounts for a fair portion of the score.

Also very taken with lurid pink and greeny-yellow BUT are these nails a bit 2nd wave Nu Rave? And if so is that OK?

But by far the BIGGEST lesson I have learnt is

Square Tips are a Nightmare…

…for natural nails. Square-tip acrylics are one thing, and one day we might just have to go there.

But square-filed natural nails crack SO easily in comparison to their pointed/almond-shaped rivals. As in, the CORNERS (which you otherwise don’t have) snap off all the time, without you noticing, to leave a diagonal, literally like cutting the corner of a piece of paper. Which is very dispiriting if you wanted a row of ferocious fake-looking angles and have to gradually watch them chip into meaningless neither-here-nor-there shapes.

Also I am told, a lot sharper. Whatever.

We’ll soon be making the transition back.

These were the first time I used some tips stencils I got for about 10p on eBay. When it was just the green with a white tip it looked way too Christmassy, so I had to add the blue, and then decided to do the black (some of which was just easier to do freehand).

Here is what some of the used stickers look like, stuck on my laptop. 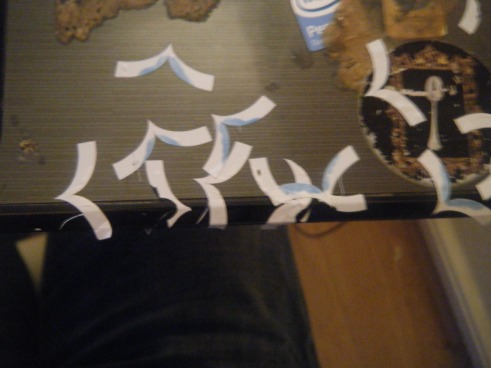 I decided to set off the dominant stencilled nail with the blue ones (on top of which was applied dabs of pink Barry M powder, gold spots, and then a sort of drunken white leopard print). 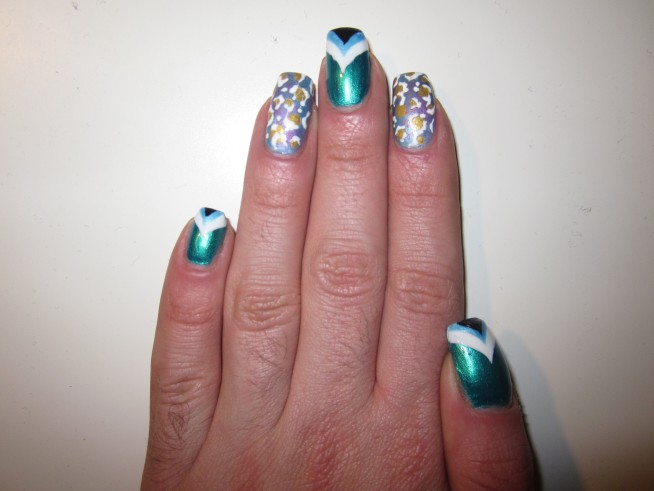 I do feel the blue, pink and gold slightly floral nails go nicely with the stenciled ones.

The former are actually quite twee and look like they could be a print for an old woman’s shirt, whereas the others are quite sporty and tacky, which is a great contrast. However I am unhappy with the length, they are currently far too short. Plus let’s not lie they could be a fair deal more exciting.

For Glastonbury festival, we opted for a favourite colour combination of purple and orange. One of those glorious clashes.

For a bit of the sun we hoped for, a nice yellow was used on the Contrast Nail.

And, if you look closely, the Contrast Nails…CONTRAST WITH EACH OTHER! Mindfuck. 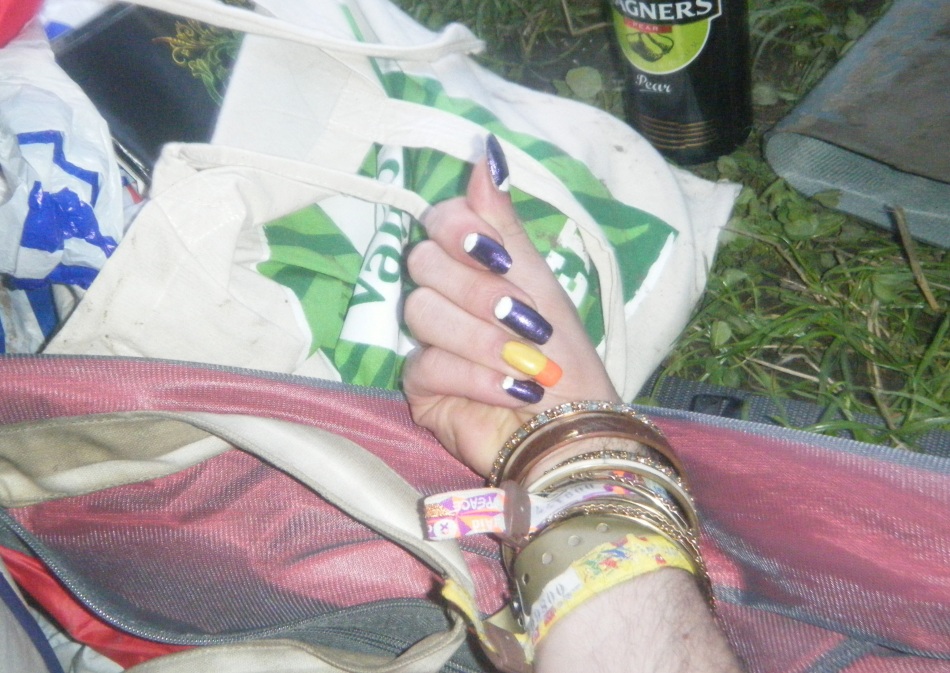 …as if you needed to ask the score for these beauts.

We’ll keep you posted on what we’re wearing on our talons week by week, PLUS:

So get ready to SUBSCRIBE (for real), and let’s VARNISH London town – all the colours of the ‘bow man.