Yes there have been some severe nail art setbacks, significant breakages. But now I have set the standard of honesty I am soldiering on and letting you grimace at process. The dream is now long square tips like KID SISTER. Here’s some short, some medium, mostly kinda square, raggedy cuticles…eugh it’s basically a war zone. 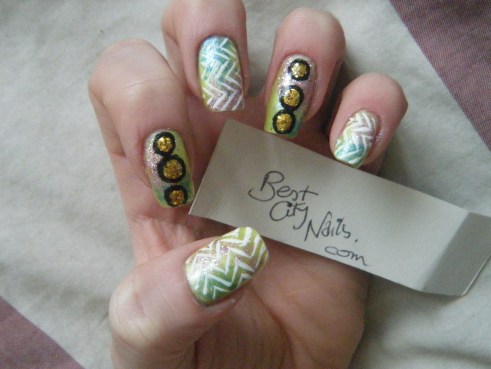 This was achieved with a lurid yellow base, then Barry M ‘Dazzle Dust’ and ‘Fine Glitter Dust’ in blue and pink. Then white zig zags with a gloopy old striping brush, and gold glitter applied to blobs of wet nail varnish and scruffily circled in eyeliner. Apply a coat of Seche Vite, and despair.

They are kind of fun, and the housemates are into them, but the disparity in nail lengths and sloppy execution really holds this one back.

Enough to make you want to go back to writing about Lana Del fucking Rey.

Throughout the Born to Die video Lana Del Rey features a very acrylic-looking square-tip, with a V-shaped red at the top, giving a conventional design a very slightly sinister edge. In luxurious attention to detail, the red tips are separated from the neutrally-coloured nail with a sliver of gold.

As the video begins in an embrace (the couple’s relaxed, tender, NAKED pose perhaps suggesting post-coitus) you might be forgiven for interpreting Lana Del Rey’s crimson-tipped talons as bloodied claws, dug into the skin of her partner during the freakiest throws of intercourse. This would sit well with the passion/pain duality in the song’s lyrics, which draw more from themes of mental darkness and physical death than one usually sees in popular love songs.

I believe it was the Marquis De Sade who said “It is always by way of pain one arrives at pleasure,” Madonna who said “There’s a certain satisfaction / In a little bit of pain,” and Lady Gaga who put it “And when it comes to love, if it’s not rough it isn’t fun.” So there’s a keen Pop tradition of exploring the sexual pain/pleasure relationship.

But Del Rey is an artist people seem be taking very seriously. In her choice of nail art perhaps she is not investigating the dynamic of pain in sex, but the more fundamental one of life and death. The French have an idiom that describes the orgasm as ‘le petite mort’ – the little death, and it is easy to expand a savage, animal sexual encounter, involving pain and the expenditure of life force, into Death at one end of the equation and, of course, a possible conception of new life at the other. The ‘blood’ on Del Rey’s nails therefore can be seen to encapsulate the paradox of the song’s title Born to Die.

It is not only in life’s creation that we may see a painful element, but in its preservation, also. The 1849 Tennyson poem In Memoriam A.H.H. contains a phrase often cited in reference to the cruelty and violence we can read into the evolutionary preservation of life: “Nature, red in tooth and claw”.

In fact, Del Rey introduces the Evolution Vs Intelligent design debate in the very first verse classically asking: “Is it by mistake or design?”

But the shock of Del Rey’s death at the close of the video over-writes much of this speculation with a new layer. How has she died? Was she really ‘born to die’ as she herself suggests, if so perhaps the earlier blood on her nails is her own, and it foreshadows her death at her own hands. Perhaps she mauls and tears at herself in a fulfilment of her destiny, and a completion of the creative process. Who can say?

We may have liked to see Del Rey’s nails in the throne scene a little more extravagant, perhaps even aping the splendour in tigers or the flowers that surround her, and contrariwise maybe a second less high-concept, standard nail bar look for the car scene would befit better befit the wayward but somehow all-American runaway couple.

But maybe this wouldn’t allow for the all the business about exploring sex, violence and the harsh realities of nature, and we all know that is what nail art is really for.

See the nails in motion below: